I have been trying to remember when I started this tunisian vest but can’t remember and I am too lazy today to look for the post, anyway it was a while ago! I worked this pattern alongside a Craftsy class about custom-fitting where you learn how to adapt this pattern to make sure it fits even if you don’t match any of the sizes provided.

This was my second crochet garment ever, and even though it is not my favourite project I did learn A LOT about custom-fitting with it and I am definitely glad I took the class and finished it. I used the yarn called on the pattern, simply because gauge is so important when it comes to garments and I wanted to give myself the best chance to achieve the gauge in the pattern (which of course never happened but more on that later). The yarn was Cascade 220 Superwash, a very nice and snuggly yarn and I used two colours even though the pattern was only in one.

So… the most important question is: did it fit?

Oh yes it did! It actually did and just the way I wanted… except for the length. I could never get the right row gauge and I just kept on going with the pattern even though I knew it was much shorter, I just kept telling myself I would fix it when blocked but this wasn’t enough. I tried to make it longer by adding a few rows of ribbing with normal crochet, and I was fine with it until I showed it to my boyfriend and asked if he liked it, at which point he said: “Yes… but is it not supposed to be longer?” 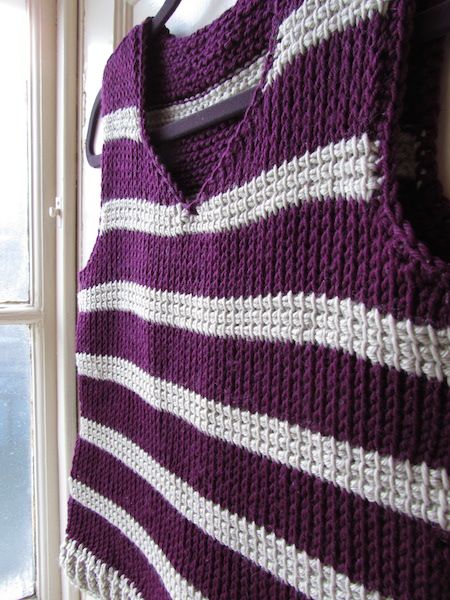 I have worn this but mostly because I put so much work in it, not because I like how I look in it. It is a bit of a shame, but I still liked many things about this project that I would like to share:

1. It fits! I learned how to measure myself and how to adapt a pattern and that is such an important skill. This will give me so much more confidence to tackle the garment patterns still in my queue for this year.

2. I have been crocheting for many years and this was the first project in a long time which had to be ripped off and started again more than once, it was very frustrating. However, I still finished it! I am so proud of myself for sticking to it, even if the results weren’t perfect.

3. This project showed me the importance of making the right swatch. I mentioned this before in a previous post but one of the big issues with my initial swatch was that I was trying to get the right gauge by crocheting in a way that wasn’t natural to me, which of course led to a lot of problems when I actually started the project.

So people: when making your swatch you should crochet as you normally would and don’t do the entire swatch at once, pick it up again on a different day since our tension changes a lot depending on how we are feeling that day. Also block it to see how much the yarn will stretch, specially if its something you plan on washing at some point.

4. Another big thing I learned with this project was to not make things more complicated for myself for no real reason. I am not sure why but since I consider myself an experienced crocheter I am usually trying to make things harder for myself and adapt patterns to make them more challenging. Now, this could work on some projects but not when I am learning a whole new skill. For this pattern I decided to go with two colours instead of one, and even though it didn’t add much complexity it was rather unnecessary and the finishing with the two colours wasn’t as neat as it would’ve been with just one. It also made the ripping off a lot harder. Simpler is better sometimes!

Of course there were some things I wasn’t happy about with this pattern and I thought I should share those as well:

1. Stripes are not the most flattering thing. I know I should’ve known this but again, I was trying to complicate things for myself. One colour would’ve looked a lot better.

2. I am not crazy about the yarn used in this pattern, it is too heavy and bulky and it shows when you are wearing it, it adds quite a big layer because of that extra fabric that tunisian crochet creates in the back. If I were to do this again (not very likely but you never know) I would use something much lighter, probably a 4 ply and would make it more of a mid-season vest.

So a lot of learning so far in this new year, and I am sure there is loads more to come! Have a great day everyone.